Looking for a new breed of cloud-driven professional services firms

While Tercera’s mission centers on empowering the people and businesses that make technology work, our investment thesis is a bit more focused (we believe strongly in having focus). More specifically, we invest in professional services firms that are defining and driving the next wave of cloud computing. We call this next wave, the Third Wave, and it’s why we named the firm Tercera (Spanish for third).

We believe the Third Wave is the biggest wave yet now that cloud technology is no longer the new kid on the block. In the last 20 years, cloud computing has fundamentally changed the way we do nearly everything, and the days of arguing whether enterprises are ready for the cloud or which cloud is better are long behind us. 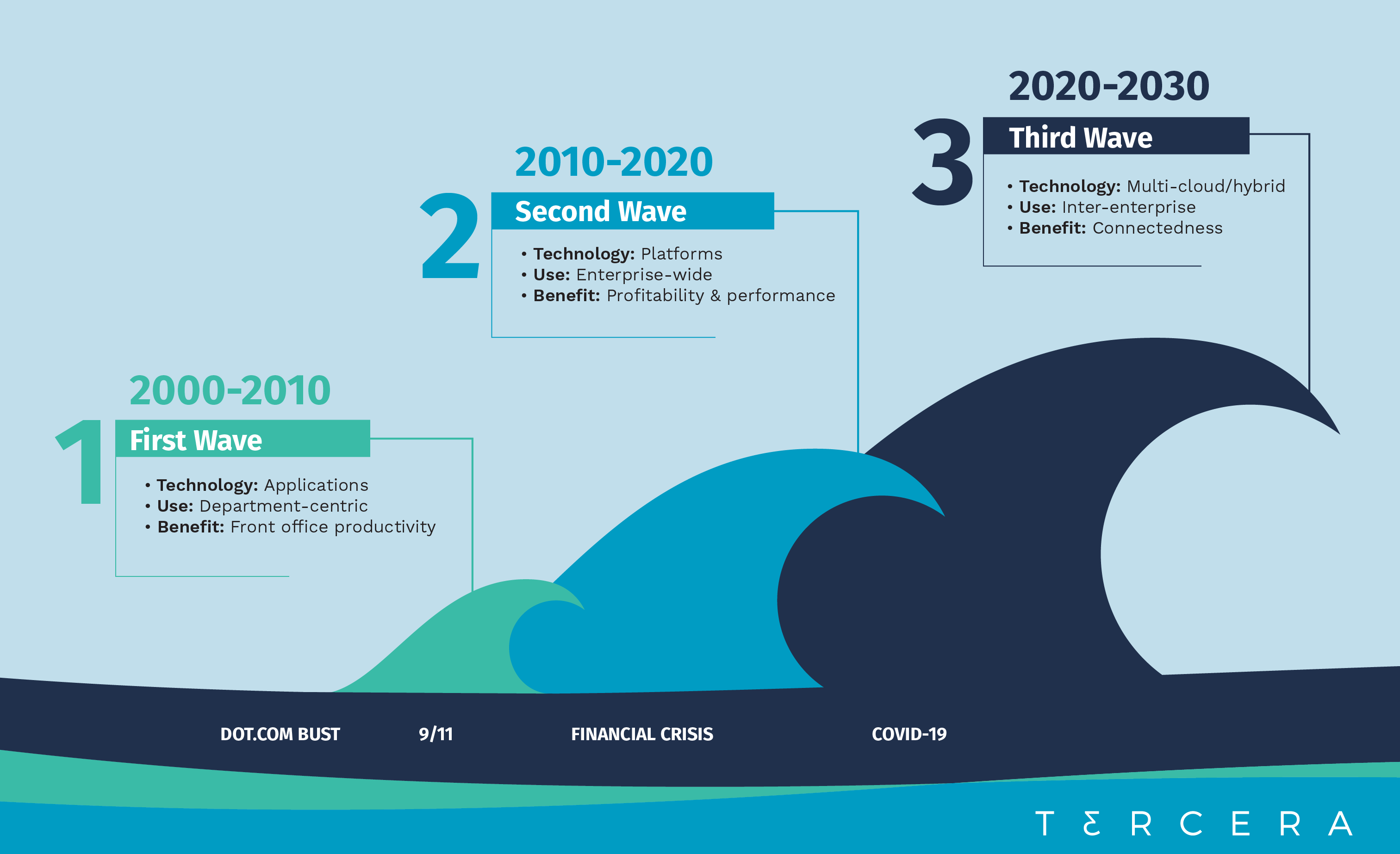 Since the 2000s, when the First Wave hit, companies have been wading into the cloud in varying degrees. That first wave, driven largely by the dot.com bust and 9/11, was mainly focused on SaaS applications, department-centric apps that were focused on improving productivity. Think Salesforce for sales teams, ServiceNow for service teams, Workday for HR teams, and Concur for finance teams. You get the picture.

During the next decade the cloud’s Second Wave formed, fueled at least partly by the 2008 recession. In this wave, cloud platforms took root in the enterprise. Productivity was still important, but with businesses struggling, profitability and performance became more important. In this wave, we saw the rise of Amazon Web Services, Microsoft Azure, and Google Cloud, while First Wave software vendors acquired and developed their own platforms to expand their foothold in the enterprise.

We’re now in the Third Wave, which like previous waves builds on those earlier waves. Productivity, profitability and performance are all driving forces for cloud adoption, but now it’s also about creating connections and optimizing existing processes in an increasingly digital world. Companies of every size that are no longer new to the cloud are finding new ways to create their own unique, customer-centric digital experiences using hundreds of cloud building blocks. And they need help.

Digital experiences aren’t created with the snap of a finger. They require people. People who have the insight, skills and proven knowledge to design, develop, implement, test, manage and evolve these experiences, and those people are not easy to find. It’s one of the reasons why we’re already seeing an influx of capital investment in training programs and people-based businesses, and it’s why we believe the Third Wave is going to be huge for professional services.

The Opportunity for Cloud Professional Services

The cloud professional services category is already a $460B market growing north of 20% YoY. Nearly 7500 systems integrators already call this category home. And with 34% of companies planning to accelerate their cloud migration plans post pandemic (BCG) and enterprises speeding up their digital business initiatives by three to six years, we believe those numbers are poised to grow — opening up a huge opportunity for new software vendors and their partners.

The software vendors that led the first two waves of the cloud – companies like Salesforce, ServiceNow, Amazon, Microsoft and Google – will continue to play a big role in this Third Wave. One only has to look at the amount of M&A activity among these firms to see that.

However, there is a new set of software providers experiencing huge growth in this next wave. Vendors like Okta, Twilio, HashiCorp and Snowflake(just to name a few) are giving enterprises the tools they need to manage their increasingly complex hybrid-cloud environments, to fortify their security position, and to take advantage of the innovation happening in DevOps, AI and RPA (just to name a few). And these vendors have just begun to build out their partner ecosystems.

Together with our capital partner Trilantic, Tercera researched 30 of these Third Wave vendors and discovered that while Salesforce, Amazon, Microsoft, and Google all have thousands of service providers in their ecosystems, many of the emerging vendors have fewer than 300 partners. Until recently, many of them have been able to rely on a bottom-up adoption scheme, which works to a point. But in order to embed cloud systems into an enterprise, you need people who can handle everything from the integration and implementation to the training and ongoing maintenance.

It’s here where opportunity lies. Especially for the cloud-driven professional services firms that can bring the technical chops, delivery models and outcomes that these new vendors need from partners.

Just as Salesforce looked to the first generation of cloud-driven services firms — that delivered faster results, had more agile processes, and teams with specialized skills that the Global Systems Integrators didn’t yet have — this new generation of vendors will demand a new breed of partner.

These are the partners we are looking to identify, to partner with and to empower. If you believe your firm is part of this new breed, hit us up here.